About 300 Words, Reminding You About Santa Claus's Size

When what to my wondering eyes should appear, But a miniature sleigh and eight tiny reindeer…

But, exactly how miniature is this sleigh, and how tiny are these reindeer? While Moore’s poem did a lot to consolidate the mythology of Santa Claus, one thing that has not remained of Moore’s Saint Nicholas is his height. Recalling this insistence on the tinyness of Santa, much of the confusion around his movement through chimney flues is eliminated. But it also lends a different stress to the comparison of the elf’s nose to “like a cherry” or of his “little round belly” that shakes “like a bowl full of jelly.” At stake here is not simply nose complexion nor belly texture, but size.

If today our Santa is our bigger, it was not always so. And many earlier illustrations are consistent with Moore’s text. Consider these from a 1912 edition [archive.org] of the poem, by Jessie Wilcox Smith:

Likewise, look at this svelte Santa, by Arthur Rackham from this undate edition [HathiTrust], who is clearly small enough to easily slip down that chimney: 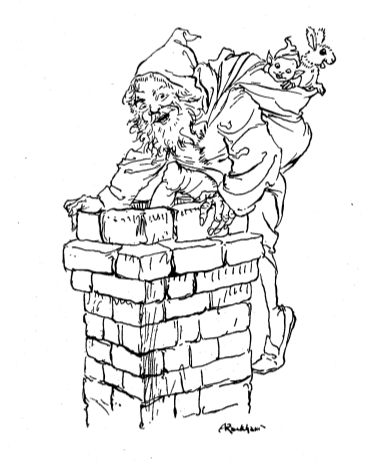 You can find more Santas at the Public Domain Review, including a gun-toting, WWII Santa, or listen to the poem on wax cylinder [1914].

Editions of the poem: